This may not go over well with many of my fellow cancer survivors who refer to themselves as warriors who beat their cancer. This is by far the most common way that I see folks referring to themselves and others. This makes sense in many ways especially in western culture–they desire to put on a brave face–they’re not giving up! That’s all well and good but the problem I have with this is that it implies that those who don’t survive their “battle” with cancer somehow lacked the fight and warrior spirit needed to beat it. This is ridiculous. For example not long after I was diagnosed one of my closest friends discovered that they had cancer as well. Unfortunately, within a very short period they died. Do I believe they lacked as much desire to live as me? Of course not. The truth is I was lucky and they were not. They had a different cancer and it was more advanced, they were older than me etc, etc. It had nothing to do with having or not having a stronger warrior spirit.

So do we really “battle” our cancer? My experience was more along the lines of acceptance and surrender the antithesis of a battle assuming one doesn’t go into a battle to surrender. I believe the war metaphor is applied to whatever our culture doesn’t like or understand. Cancer is a subject that few want to reflect on for what lurks in cancer’s shadow but death and death for us is taboo, practically unthinkable. So a pile of war jargon is used out of convenience and avoidance as we are cast as warriors, heroes who get a pat on the back because what else can you do with a hero?

In the U.S. we go above and beyond using war as our dominant metaphor. It has become the default reaction to frame every encounter as a war, a fight, a battle. Even something as benign as a baking competition on television. For instance the Food Network has a show called Cupcake Wars. Are these bakers really battling with flavors? Can I please eat my cupcake in peace? When everything is couched as war then aren’t we constantly at war? It sure seems as though everyone is involved in some kind of battle or fight over practically everything. Everything must be fought over, battled for, subdued. Who wants to live in a world framed like this? Not me, so please don’t refer to me as one who battled and beat their cancer. I was lucky! I had the right team of doctors, my body responded well to the treatments, I happen to have some decent genetics that helped the cause, I ate right, exercised, and worked to keep the stress in line. I did not battle or fight my cancer.

Cancer is one of life’s great confrontations. It is incredibly difficult to deal with on a physical, emotional and spiritual level. It brings us to the precipice of our mortality and those of us lucky enough to step back from that ledge and get more years of life should stop acting as though we beat it. We were lucky. I was lucky. There’s nothing wrong with that.

The great harm in declaring self-victory over cancer is that it also implies there is something definitive you can do to defeat your cancer. Beyond following your medical team’s treatments, eating right, exercising, keeping stress to a minimum, what really can be done? Furthermore the desperation we feel after being diagnosed with cancer opens all kinds of opportunity for exploitation from others including other cancer survivors who want to convince you they did it themselves and you can too! Just buy the herbs on offer, do that yoga, or juice that cancer away. Billions of dollars are made from the misery of cancer and the desperation we feel to live a little longer. With cancer the chances are it will get us eventually. Do we want to be in a battle all the way to our end? And then have folks say we lost our battle with cancer. As I’ve said before this conveys nothing of the levels of emotional and spiritual healing that can occur when one is faced with one of life’s great confrontations. This is where our power lies; to face our potential demise and to decide to make it a gift. To respond with love instead of war.

For whatever time I have left on the planet I don’t want to spend it in a fight. As David Bowie sang back in the 80s, Let’s Dance. 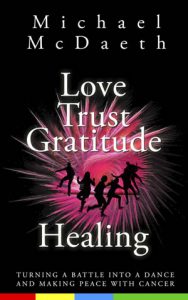 One morning a couple years ago I woke to find I had lost my ability to walk overnight. If that shock wasn’t enough I found out there was a tumor on my spine caused by an incurable cancer called multiple myeloma. Over the next year I endured radiation, chemo and a bone marrow transplant all while learning to walk again. I wrote about the experience in my memoir titled Love Trust Gratitude Healing: Turning a Battle into a Dance and making Peace with Cancer. It is available at amazon in paperback and kindle editions with an audio version on the way.

My book and this blog are intended to help anyone who is going through a major life confrontation deal with the fear and anxiety that accompanies these incredibly difficult events and prevent us from seeing what all confrontations offer: an opportunity for new broader perspectives and healing that can be spiritual and emotional even when we may be struggling to heal physically.

I’ll be sharing excerpts from the book as well as  day-to-day musings as a cancer survivor.

Don’t hesitate to comment or DM me if you have questions or I can be of assistance. 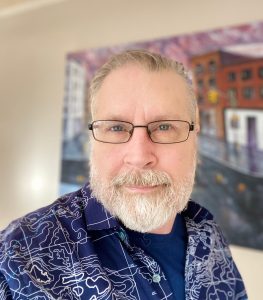